Wastewater Management is Increasingly Becoming an Issue for Wineries 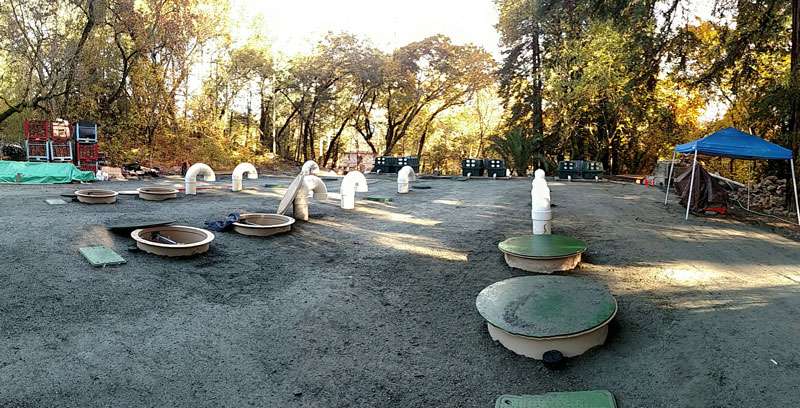 Few issues receive less respect and attention around the wine industry than the waste water produced by wineries. This unglamorous, inglorious byproduct of wine production does not produce revenue, smells bad and would make everyone involved much happier if it would just go away.

Unfortunately waste water management is increasingly becoming an issue for wineries. The latest push by the Regional Water Quality Control Boards (RWQCB), the state offices chartered with preserving the water quality throughout the state, is to ensure that all wineries discharging effluent to land have met Board-adopted waste discharge requirements. Most wineries already have done this, but some wineries have not. It was the policy of the RWQCB for small wineries, those estimated to discharge less than 10,000 gallons per day, to bypass their review process. The RWQCB relinquished their waste water review to the county level.

As most wineries start small and grow with their success and caliber of wine produced, so does the water used and the waste water produced. So a winery built 10 years ago with an estimated 10,000 gallon per day water usage, may be currently using many times more, and still not be permitted. Also, a waste water system designed and installed when the winery was starting may be undersized with winery expansions.

The last big push for the EPA is the Clean Water Act. What this means directly for wineries is that they will face an unprecedented level of scrutiny regarding the waste water they produce. New wineries and expanding wineries have already felt the increase in permit scrutiny. Old technologies are being disallowed (such as septic tanks and leach systems, which are prone to early and frequent failure).

What is the big deal with winery effluent? After all, it is not radioactive, does not contain pesticides, chemicals or fecal matter, so what is the issue? Interestingly enough, the culprit behind the winery waste water concern is directly related to the winery’s success:  it is the sugars in the grapes. These sugars, which we all enjoy in the finished product, are easily dissolved in wash down water, and are measured in the effluent as BOD (biochemical oxygen demand). The BOD levels resulting from crush,  barrel washing and bottling may be as high as 5000 ppm or mg/l.

These high levels of BOD are the direct cause of the foul odors which pervade winery waste water systems during crush, especially during years when the weather stays warm into October. The current BOD value required for both Napa and Sonoma Valley land applications is 40 ppm. A waste water system must also include a holding pond to retain the water for the 6 winter months when ground application is not allowed. Thus, a waste water system which is able to reduce the BOD levels from 5000 to 40 ppm is required.

If high levels of BOD in untreated effluent are allowed to flow untreated to surface water (e.g., streams, rivers, ponds and lakes), the dissolved oxygen in the receiving water may be quickly consumed. Aquatic and amphibious life forms suffocate as the dissolved oxygen in the water is quickly depleted. While this is bad enough in itself, excess BOD can create another, possibly more dangerous scenario. When high levels of BOD combine with chlorine from chlorinated water sources, a known cancer-causing disinfection byproduct, Trihalomethane (THM) forms. For example, if high levels of BOD and chlorinated wash water are allowed to percolate to the ground water levels, then the cancer-causing THM’s have just contaminated the ground water, which is a very scary reality.

The above scenarios are not science fiction, but documented facts. These are very real and large issues which are currently being faced by a large crushing facility in the Valley, along with several raisin and fruit processors. As their permits are being renewed this year, the level of BOD previously allowed is being greatly reduced.  This same scenario is also occurring within the winery industry:  first the largest, and then the next, until all are permitted and reviewed.

So the above quickly leads one to conclude that minimizing BOD levels in winery effluent efficiently and expediently is in everyone’s best interest. There are three techniques utilized by wineries to reduce BOD levels: 1. Septic tank leach fields (quickly plug with the high solids loading rate) 2. Ponding (usually several acres in size, often located on valuable vine land, fail with high BOD loading as indicated by objectionable odors during harvest) and 3. Bio Reactors/pond systems, which are the newer and the most successful waste water systems for wineries. The author has been involved with and/or knows of 3 Bio Reactor systems installed in the Central Coast region and 2 large ones in the Central Valley, all installed within the last three years.

A Bio Reactor is designed to satisfy the oxygen demand of the BOD in the effluent. The BOD (dissolved sugars) is quickly and efficiently digested by microbes and enzymes in a highly saturated aeration system. BOD reduction rates of up to 80% per day are obtained. This same technique is utilized extensively by most municipal sewer districts to reduce BOD levels to meet stringent federal BOD discharge levels. Why? Because Bio Reactors makes sense, are safe, are cost-effective and are a proven technology.

A Bio Reactor consists of an aeration basin (cement vault or tank), an aeration source (high volume, low pressure blowers) and a clarifier. The microbes consume the dissolved sugars in the highly aerated environment. As the effluent passes through the clarifier, the microbes settle and concentrate, and are then pumped back into the aeration basin. This is known as a Return Activated Sludge (RAS) system.

A pH level of 7.0 is required, as with any aquatic life, for proper operation of return activated systems. Some microbes live at 6.5 some at 8.0, but the stress directly reduces the reduction efficiency of the microbes. Maintaining a pH of 7 is easily achieved by a simple proportional pH controller. Sometimes both acid and caustic are required, as winery effluent has a pH ranging from 4.5 (wine or high sugars from crush) to 10 or more with caustic cleaning of tanks.

As the system thrives and the microbes prosper and multiply, an optimum microbe level is achieved, as indicated by the lowest BOD levels. To maintain this level, it is required to remove some of the microbes from the system. This can be accomplished by a septic truck, or by a plate and frame press, which is used to dewater the sludge onsite. The dewatered sludge (plankton) can be used as animal feed, or composted.

Bio Reactors can be designed to be modular in nature, allowing for system expansion with both the winery growth and the decreasing effluent thresholds. The treated effluent then flows to an irrigation pond sized to retain the flow for 6 months during the winter months. Installing a Bio Reactor before an existing ponding system is a recommended way to achieve higher BOD removal rates.

In closing, wineries are facing increasingly stringent levels of scrutiny in their operation involving waste water discharge. The RWQCB, following directives from the EPA under the Clean Water Act, is well funded and fully staffed. Annual discharge reports are not only being checked to ensure they were submitted, now they are being reviewed as well. The purpose of this article is both to inform and alert wineries as to the waste water issues and what their choices are.